Using the Shrink ability and running into a wall at the left side of a room that is only one tile thick (which is most of them) will cause you to clip through to the adjacent room at that position! This means you will likely end up stuck in a wall, or out of bounds, or even in the dev room (possibly with no escape!). Please be careful using the Shrink ability in such locations. Thanks to garyzdragon for pointing this out.

While seeking shelter in a cavern during a storm, you are suddenly trapped within by a mysterious energy field. After searching the area, you find a deep hole leading further into the caves. You must find a way to escape, and it looks like the only way forward is down.

- Adventure through three different cave environments!
- Find seven abilities that allow you to explore deeper into the caves!
- Explore every nook and cranny to unlock a variant ending!
- Play in browser or with the file provided (tested with BGB)!
- Experience authentic Game Boy graphics and sounds!
- Enjoy the complete lack of chiptune music since I'm a slowpoke!
- Probably experience some random bugs because I keep finding more somehow!

- Selecting "New Game" will *immediately* overwrite the save file with a fresh save. I only recently got saving to work and have not had the time to make it more user friendly
- Selecting "Continue" on first play with cause the game to load at a default position, then crash, but resetting should fix it
- I haven't had time to compose any music yet, due to time crunch, so sorry for the silence
- I had plans to create boss battles, but due to a combination of lack of time and running into some system limitations, I had to table them in the interest of finishing the core game. Perhaps I'll expand the game in the future... Cavern DX maybe?
- I learned a lot about working with Game Boy limitations during this, but I still have a lot to learn. Some parts are admittedly rough, with a few laggy spots, but everything is functional and playable at least.
- Made with ZGB! It's cool stuff! If you are interested in Game Boy development, go check it out!

Pretty fun game. I've beat this thing about fifty times by my estimate. I've found a few glitches in my many playthroughs.

I highly doubt this game will receive an update as it was created just for a Jam, but I thought I'd state them for the record. It's a great game and I can beat it in less than 10 minutes now with a fairly optimal run.

Edit: Turns out if you jump high enough against the wall in the same room as the out-of-bounds glitch with the "shrink" powerup activated, you enter a room with a couple platforms with the castle tileset. You can only run around half the left half of the room and crossing into the right causes you to be transported back to the mushroom room. I can only surmise that this is a dev room of sorts.

Fifty times? Wow, I definitely think you’ve played this even more than I have! That's awesome! Thanks so much for playing so much and thanks even more for giving feedback!

On the matter of updates, I do want to get back around to this someday as this version was incomplete from my original vision. I had to cut some content due to limitations I ran into, such as sprite table limits, that I imagine I can fix or find workarounds for if I have the time to do so (which, with it being a jam, I did not back then). I really would like to make a ‘DX’ version with the additional content, maybe even a GBC mode, but unfortunately at the moment, the original project files are on a computer stuck in storage across the country so I am unable to until I can get my hands on it again (which is also part of the reason I never got the source code up on GitHub like I told Zalo I would try to do). Hopefully that day is someday soon though.

On the dev room comment, yes, this is a dev room! It was used to work out the jump heights and distance when I first started working on the project. The reason that you are entering it here with the clipping glitch you found is that it is the default room that the engine loads if it cannot find any other room to load. Since there is no room overlapping the space left from the top screen of this room (unlike further down, where you ended up out of bounds), it loads this room instead. At this location, you are restricted to the left half because the engine tracks where you are in the world and, if I recall correctly, this room is loaded in such a way that the left half is always on either the odd or even column in the world, so once you cross back over the half, it reloads into the room you came from. If you are interested in checking out the full room, you can head to the vertical room to the right of the starting room, then use the shrink clip to go through the left wall at the top of it. That will load you on the right half and since it overlaps no rooms, you’ll be able to see the whole thing (fair warning though, that means you might be stuck there, though I have managed to escape using that shrink clip again as well as some awkward out of bounds movement). There’s not much to it, but I figured I'd let you know in case you were curious to see the full thing.

Thanks again for playing the game and giving feedback. It’s always nice to hear that someone has enjoyed something I’ve made enough to put so much time into it. I will be sure to let you know if I manage to get around to making any updates to it in the future, or do anything else with the project. Take care!

The pattern I have found to be the most reliable is the following:

Thank you for the reply. The fifty times thing is no joke; I play it sometimes when my professor drones on and I need something to focus on for ten minutes. Let me know if you ever need a dev tester for any future versions as you can already see I'm very thorough lol.

Great game! Love how spacious it feels, the tone of the graphics, how the cavern expands and all the upgrades play out. Looking forward to figuring out the alternate ending. :)

This a very good improvement over the previous one

Still haven't finished it, you put a lot of content on it. But so far I am really enjoying it, congrats!

I guess it's too much to ask, but a pause screen with a little map would be awesome!

By the way, I have added a link to the showcase in ZGB wiki https://github.com/Zal0/ZGB/wiki/Made-with-ZGB

Any chance we could get access to the source code?

Reply
The Great Gallus2 years ago

Sorry for a bit of a delay, been a busy month. Sure, I can get a repository set up with the source code sometime soon and let you know when it is up. Should I include the ZGB files in the repository as well, as I believe that I made some adjustments to it for things like transition effects?

yeah, Ithink it could be useful for people developing games with ZGB out there :)
(include the modified files and everything)

Aah this one is better than previous one of course :)

Anyways, I've explored deeper and gained more upgrades. Still looking for last upgrade(s). Speaking of which, I've spotted two hearts. I've taken heart in room with mini tunnels however taking that caused the other heart (in tall room requiring wall jump) to disappear. Is that a bug or player can only take one or the other?

Reply
The Great Gallus2 years ago

That appears to be a bug. I had an issue earlier on in the design that caused the hearts to vanish when reloading a save file as I was saving/reading the wrong flags to indicated which had been picked up. Thought I'd squashed it, but apparently I didn't quite get it! Thanks for the heads up, I'll be sure to look into it for any future updates. 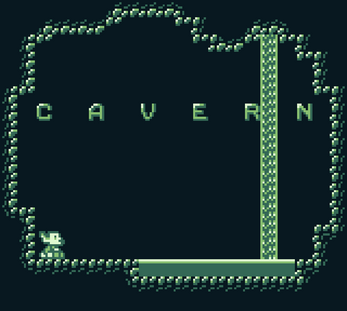